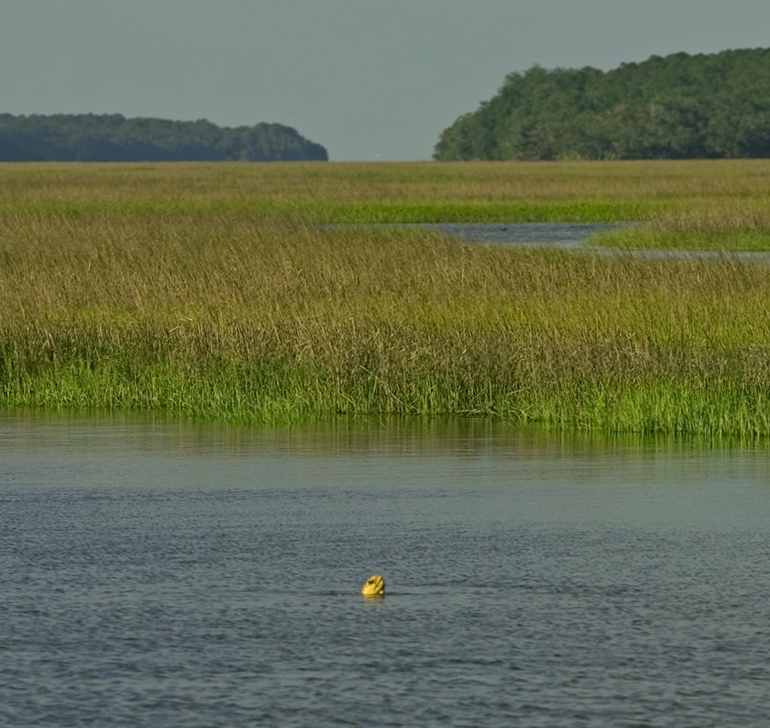 With sea turtle and manatee sightings on the rise on Georgia’s coast, boaters should be on the lookout for these big and rare animals.

Boat strikes are a leading cause of sea turtle strandings and manatee injuries and deaths. Manatees and all sea turtle species found in Georgia are protected by federal and state laws.

Tips on what to watch for in the coast’s murky waters differ. A “footprint” of swirls may mark a 9-foot-long manatee underwater. A 300-pound loggerhead sea turtle may show only its head when it surfaces. Sea turtles spend more time on the surface in spring, putting them at greater risk of being hit by a boat.

What can boaters do? Be vigilant, be ready to slow down or steer clear, and if they do run into a sea turtle or manatee, stand-by and immediately contact the DNR at 800-2-SAVE-ME (800-272-8363). This provides biologists the best chance to help these animals and gather data useful in conserving them. Boaters will not be charged if operating their boat responsibly and the collision was an accident.

State Sea Turtle Program Coordinator Mark Dodd, a senior wildlife biologist with the Georgia Department of Natural Resources, emphasized that sea turtles are not limited to the ocean side of barrier islands. “They occur everywhere, not just in the ocean,” Dodd said. “They’re in the sounds, the estuaries, the tidal creeks.”

While nesting data indicates that federally threatened loggerheads are holding their own, boat strikes that kill or injure reproductive females are a significant threat. Of the 84 dead or injured sea turtles found on Georgia beaches last year, 45 percent of those that could be assessed had suffered injuries consistent with being hit by a boat.

Manatees share a similar problem. These big, slow-moving mammals swim just below the surface, often putting them in harm’s way for oncoming boats. Watercraft collisions caused about 28 percent of the manatee mortalities documented in the state since 2000.

West Indian manatees, including the Florida manatee subspecies found in Georgia, are protected under the Endangered Species Act (they are listed as threatened) and the Marine Mammal Protection Act.

Manatees migrate from Florida to Georgia each spring, attracted by abundant marsh grass and other aquatic vegetation. Some move back and forth between the states through summer, until colder water temperatures in fall draw them south to Florida for the winter. But from as early as March and into November, manatees occur in all tidal waters throughout coastal Georgia, said senior wildlife biologist Clay George of DNR’s Wildlife Conservation Section.

Also, as in 2021, there is another factor in play this year. Reduced food resources at key wintering sites in Florida have led to the death of 300 or more manatees along the Atlantic Coast. This situation, part of an ongoing Unusual Mortality Event declared by federal agencies, means that as the animals begin migrating north, Georgia’s marsh habitats are that much more critical.

“Manatees feed on smooth cordgrass and other emergent vegetation that is abundant in our freshwater and brackish marshes,” George said. “When manatees arrive in Georgia they have essentially unlimited food.”

Yet making it here doesn’t mean manatees are out of the woods. The stress of migration and chronic malnutrition can continue to affect them even after they find food. “It remains to be seen if we will see an uptick in mortality in Georgia as more manatees begin arriving,” he said.

Boaters can lessen the risk they pose to manatees by heeding low-speed and no-wake zones, particularly around docks where the big mammals eat algae growing on the structures. George also advised sticking to the deeper channels when boating in tidal rivers and creeks. Manatees “are often right along the edge of the marsh,” he said, feeding on Spartina alterniflora, or salt marsh cordgrass.

Boaters and others are also encouraged to report any dead manatees and sea turtles they see. (If the turtle is tagged, include the tag color and number in the report if possible.)

DNR monitors sea turtle and manatee mortality through the Marine Turtle and Marine Mammal Stranding and Salvage Networks. The information gleaned, including from necropsies to evaluate cause of death, provides the primary index for threats these animals in Georgia’s coastal waters.

Report stranded sea turtles in Georgia by calling DNR at 800-2-SAVE-ME (800-272-8363). Stranding updates are available at seaturtle.org/strand/summary (pick Georgia from “Select a Program”).

REPORTING MANATEES
If you see or photograph a healthy, injured or dead manatee, call DNR at (800) 2-SAVE-ME (800-272-8363). Note the date, time, location and number of manatees seen, plus the coordinates, if possible.

Manatees sometimes gather in groups to socialize. Large mating “herds” can top 20 individuals. Socializing is normal manatee behavior, senior wildlife biologist Clay George said. “If you’re boating and see a manatee, slow down and keep a sharp eye … other manatees could be nearby.”

Boaters can help protect manatees by:

Also, never feed manatees or give them fresh water. This could teach the animals to approach docks, putting them at greater risk of a boat strike.

And never pursue, harass or play with manatees. It can be harmful to manatees and it’s illegal.

From sea turtles to bald eagles, DNR’s Wildlife Conservation Section works to conserve rare and other Georgia wildlife not legally fished for or hunted, as well as rare plants and natural habitats. The agency depends primarily on fundraisers, grants and contributions. That makes public support key.

Georgians can help by supporting the state’s Nongame Wildlife Conservation Fund. Here’s how:

Visit georgiawildlife.com/conservation/annualreport to see how your support is put to work for wildlife.