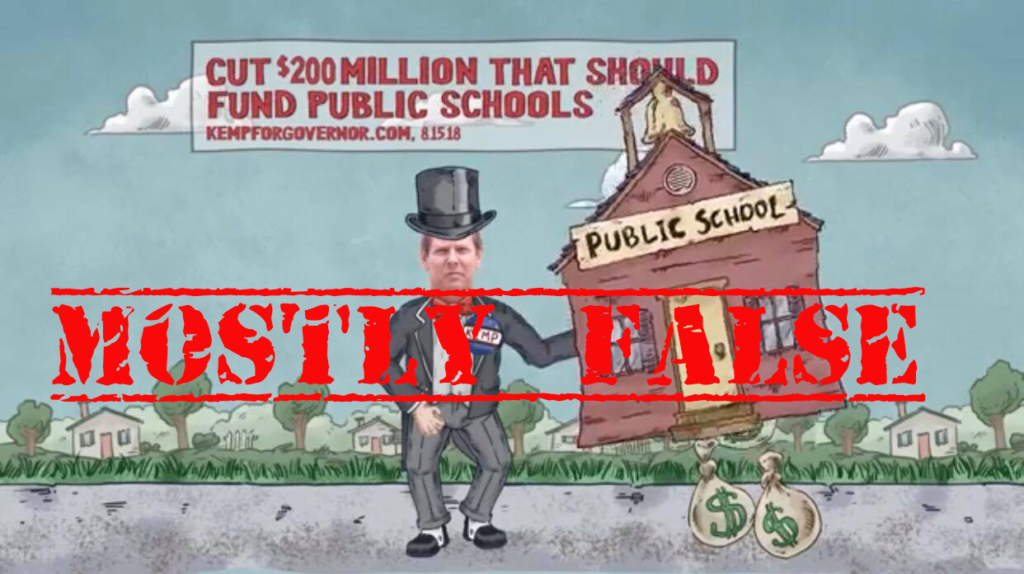 The Georgia Democrats have released another television ad against Republican candidate for Governor Brian Kemp.

The ad, titled ‘Moneybags, blasts Kemp for supporting an increase to the Student Scholarship Organization (SSO) tax credit program from $100 million to $200 million. The Democrats claim the position on education is “good for millionaire Brian Kemp, terrible for Georgia.”

The Kemp campaign responded to the ad Thursday saying:

“The school scholarship program provides Georgia students access to the best schools in their community. The program is diverse and serves people in every region of our state from all walks of life. As governor, Brian Kemp will invest in public education and raise teacher pay while protecting school choice. Sadly, Stacey Abrams wants to put her extreme agenda first and eliminate funding for SSOs in Georgia. She will force parents to pull their children out of high-performing schools and settle for the status quo.”

So how much of the ad is true? Let’s break down the ad claim-by claim.

CLAIM: Millionaire Brian Kemp wants to take $200 million dollars of your taxpayer money that should go to Georgia Public Schools and give millions to the wealthy to attend private schools.

Individuals are able to redirect taxes owed to the state for a dollar-for-dollar tax credit. For example: A taxpayer donates $1,000 to a student scholarship organization (SSO) and receives a $1,000 tax credit on their state tax liability. This is available to individuals, LLCs, and C-corporations.

The statement that money “should go to private schools” is not something that can be proven, as the state budget is $25 billion, with just over 50% going to school budgets, and comes from a variety of sources. If this is true, similar tax credits like film tax credits, supported by both candidates, and yacht repair credits rob public school coffers as well.

Additionally, the legislature doubled the tax credit from $100 million to $200 million in 2018 while also fully-funding education for the first time in decades. The funding formula per student is the same regardless of whether or not the cap is $100 million, $200 million, or $0. Schools may lose funds but only in proportion to the students they aren’t educating, not overall funds available to educate on a per-student basis.

Student Scholarship Organizations (SSO), which receive the tax credits, provide scholarships to private schools for children of all economic backgrounds, especially in rural communities, not just the wealthy.

Therefore, this claim is false.

CLAIM: “Kemp also voted to hand over public schools to the Governor, the position he’s now running for, and take away local control, opening doors to private interests taking over our schools.”

FACT CHECK:  The claim is true that Kemp voted in favor of Opportunity School Districts which give power to the Governor, but not as a legislator or any formal capacity to make it law. He stated to the AJC that he voted in favor of the Constitutional Amendment as a lay voter in the ballot box, just as the rest of Georgia voters did in 2016. Kemp was not serving in the legislature at the time. The measure failed. As Minority Leader, Abrams voted in favor of the revised version of the OSD bill in 2017, which still grants power to the Governor to appoint an unelected person to oversee failing school districts. The 2017 version became law without approval by voters.

Therefore, this claim is misleading, but not false.

FACT CHECK: What is good, who is greedy, and what is terrible is an opinion, not a fact and therefore cannot be fact-checked.

The bulk of the content deals with the first claim, which is false. Therefore, the ad is deemed mostly false.

Jessica Szilagyi is a former Statewide Contributor for AllOnGeorgia.com.