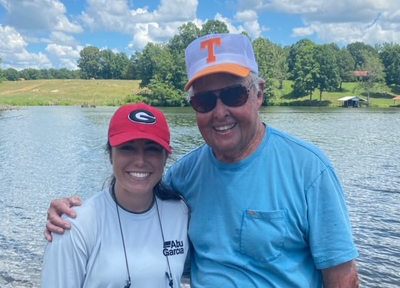 I was riding through northern Mississippi when it finally hit me that I was going fishing with one of the greatest fishing legends ever. That morning I loaded down my Toyota Tacoma with all of my fishing gear for the opportunity of a lifetime.

Through my job at Source Outdoor Group, an outdoor marketing agency, I am fortunate to work for the great people at Millennium Marine and Millennium Treestands. My company handles their marketing, including public relations, media planning, creative design and influencer management. My client, Millennium, sponsors Bill Dance and provides him with the chairs and seats you see on his boats. Hopefully you are now starting to see my connection with the greatest and clumsiest fisherman the world has ever seen. I value my relationship with the Millennium brand and the people there, and am so thankful they put together this opportunity for me.

I barely slept that night. I woke up every 30 minutes thinking it was time to get up and go fishing. When it was finally time to get ready, I got up and did some last minute rigging in the parking lot of the Hampton Inn. I tied on a few Berkley worms and bladed baits on my Abu Garcia Veritas combos. I made a cast in the front yard of the hotel and actually got a spinnerbait stuck in a pine tree. I was getting a little nervous, so of course I had to do something dumb to make myself laugh. I got it out of the tree and thankfully nobody saw it happen.

Bill picked us up at our hotel that morning. He pulled his jon boat right in front of the hotel, and it wasn’t long before a guest spotted him and asked for a picture. Bill being Bill acted like he had known the stranger for years. After that, we took off toward Bill’s private pond. Before I left the parking lot I said “Mr. Bill, I don’t know where I’m going so don’t leave me, ok?” It only took one red light for him to leave me in the dust. I got nervous and ran the red light, but I haven’t seen a ticket for it yet. We then traveled back into northern Mississippi, and looped back into west Tennessee to arrive at his private pond.

It took forever to get there, but when we did finally arrive, I was positive I had never seen a more beautiful pond. It was huge, there were hills all around it, standing timber, and needle grass. I got out my Abu Garcia rods and thought “I can’t believe I’m putting my rods in Bill Dance’s boat.”

My favorite thing that I observed about Bill was that he does not get fancy with anything. I asked, “Mr. Bill, what are you going to tie on for today?” He replied, “Well dang.. I guess whatever I can find.” I laughed, knowing me and most of my fishing friends are so strategic that we would even dye the pinchers on a chigger craw, trim frog legs to a precise length, and paint a little red streak on a crankbait, because we think it will give us some kind of competitive edge. Bill literally just tied on whatever was in reach and threw it all day long. Bill also owns nice boats and the boat we actually took out further proves my point. His favorite boat is an old bass tracker, beat up and worn out from years of use. 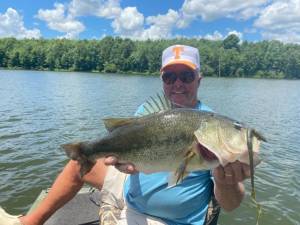 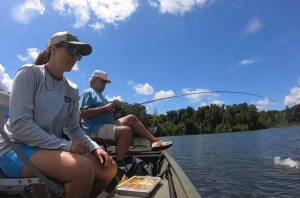 I threw a white spinnerbait most of the morning, until I had some kind of inner feeling that I should change to chartreuse and pink. I casted it near some timber with a medium speed retrieve, just enough to get the blade spinning. I knew I had made the right decision when I felt a big one hit my bait hard and ran hard with it. He was taking line and running, and I was praying he wasn’t smart enough to get wrapped around the hundreds of logs in that pond and break off. My client, William, was in the boat with us and said “Uhh… Bill I think she’s got a good one. It’s taking line!” All Bill said was “Take your time.. Take your time.. Take your time..” I took my time and was totally keeping my cool until the fish jumped. I swear in my eyes at that moment, that fish looked big as a whale. I finally got the fish in, reeled it over to Bill who lipped the fish for me and got it in the boat. I had officially lost my mind. I caught a six pounder with Bill Dance. An absolute fatty.

Bill helped me position the fish for a picture to look even bigger than it really was. I don’t mean to be giving out his secrets, but the stuff Bill did to the fish was insane and I had never seen it before. He adjusted the lure to sit perfectly for a photo, and intricately wrapped the line around the fish’s top fin. “What are you doing? I asked. “We’re going to make this six look like a ten,” Bill said. Sure enough Bill helped me get the perfect picture and my six did indeed look huge on camera. One thing I learned is that Bill is all about the perfect picture. He’ll adjust you so that the light hits you right, bow the fish to look bigger, and wrap line around the fin to keep it standing up. He even started adjusting my hat and telling me to move this way and that so that he could see the sponsor logos on the clothes I was wearing. He loves promoting his sponsors every chance he gets, and I do too, so we were a great team.

Bill has all the tips, tricks, stories, and jokes. I learned so much. When I go into a situation like this, I have the attitude that I know nothing and am there to learn everything. I’ve fished with many pros and knowledgeable folks, and I try to be a sponge rather than a know-it-all. With Bill, I learned the advantages of putting circle hooks on a crankbait. He taught me how to fish better in standing timber. We went over the best ways to call up suspended fish, along with patterns and seasonal behavior. “Do you see them?!” I answered a hundred times that day as Bill pointed to his Garmin. I learned that Bill once held a catfish record on my home lake, Lake Sinclair in Milledgeville, Georgia. I was surprised to learn that Johnny Morris bought the Memphis Pyramid and put a Bass Pro in it all because of a bet with Bill Dance. “He told me he would put a Bass Pro in that pyramid if we caught a 30 pound catfish that day. And we did, so he did.” Bill and his wife Dianne had also just celebrated sixty years of marriage so he even gave me his secrets and advice on that as well. Bill is a jokester as well. If I ever looked away, he would hit my rod to make me think I had a fish. 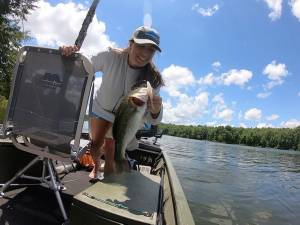 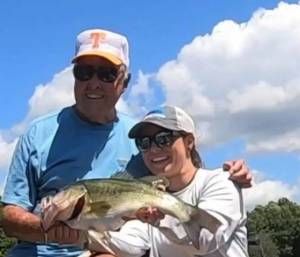 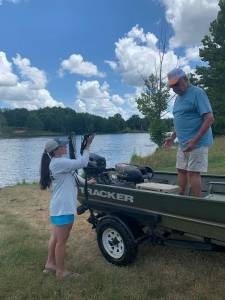 We caught at least thirty fish that day and it was finally time for me to head back to Georgia. Since Bill is a Tennessee fan, I made sure to bring along a UGA hat for a photo. We were about to leave when I said “Mr. Bill, I have to get a picture in my Georgia hat with you, you know, for the people back home.” To my surprise he said “Oh do you want Luke’s? You can have Luke’s. He left it.” Bill then pulled a red hat with a Georgia “G” on it that had belonged to Luke Bryan. They had shot the music video a week or so before for Luke’s new song Bill Dance. Luke had left the hat in Bill’s truck, meaning it now belonged to me. After that, Bill proceeded to tell me the directions to get back on the main highway about 10 times. He waved goodbye and I left knowing I just had the best fishing trip of my life. I was so happy that I couldn’t even process how awesome it was until the next day or so.

I take a lot of pride in the work that I do for the fishing industry, but quite honestly I’m just a girl who loves to fish. What is most important to me are the relationships built along the way, and I am thankful to partner with great fishing brands and great people that make these opportunities a reality for me. I will always treasure this day and the memories I got to share with a legend and everyone’s hero, Bill Dance.

Connect with her online https://linktr.ee/macywatkins